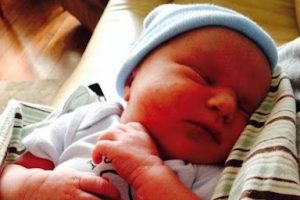 Jonathan was my 4th pregnancy, but my first home birth. Starting at 38 weeks, I would have contractions that would frequently start and then stop. We tried several things to get Jonathan to come (including waiting). When he was 11 days past his due date and our attempts to “evict” him had not worked, my midwife, and the OB she works with, both agreed that he needed an induction and I wouldn’t get my home birth after all…

The morning we were to leave for the hospital I called Robin and told her I didn’t know if I was in labor or just nervous. She told me not to leave yet, that she’d come check. We took a chance and cancelled the hospital visit at 5:25am. Things then progressed VERY fast! A few minutes after we hung up, I thought real labor had begun. I went to, ahem, relieve a little more of that castor oil… But in reality, I was about to give birth!

Poor Jonathan was born on the john (just 22 minutes after I called the hospital to cancel the induction while still wondering if I was in labor for real or not)! One day, he’ll think that is gross in a cool way, I hope. And, in case you’re wondering, no, he didn’t fall in the toilet. I leaned over it just in time for my awesome speedy midwife to catch! SOOO far from my plans. The only place worse to give birth would have been Walmart… ha! But glad God was in control and it sure made for an adventurous morning.

Robin and Julie were amazing midwives. It was such a huge blessing to give birth at home, and be able to stay home, comfortable with my entire family. I once questioned the midwives when they’d tell me, “Moms who give birth at home never go back to hospital births.” They’re right! I wish I’d met Robin with pregnancy #1 and not my last! I’ve become a big advocate for out of hospital births since my home birth. I still want a do-over just to experience it again – well, one not over a toilet next time.