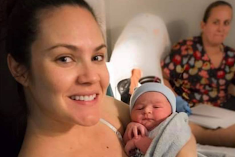 I had been in early labor for what felt like 3 months. On 2/24 I started to have stronger contractions on and off. Nothing painful, just tight. On 2/26, at about 2pm, David and I had picked up the girls from daycare and I was driving back. I got my first painful contraction. After that, I took a nap and woke up around 4:30 pm. The contractions were getting more painful, but they were not regular and they were only lasting 30-45 seconds. My dad came over to see the girls and help me because David had hurt his back doing crossfit. He had taken a muscle relaxer.

David went to bed around 6pm and my dad helped me bathe the girls and put them to bed. Contractions were getting painful. I texted my midwife, Julie Hatfield to come over and check me. I asked my dad to stay until she got there. I bounced on the ball and watched The Office. Contractions were 7 min apart and lasting about 45 sec- 1 min. They were painful. Julie got to the house, our AirBnB in San Antonio on “Heavens Peak”, she said I was 4cm dilated. This was at 7:45 pm. David was passed out from the muscle relaxer.

Contractions were getting longer and stronger quickly. I called my doula, Toni, to hurry up and get to the house. At this point I had woken David up and was talking about going to the hospital to get an epidural. Contractions felt like Ben was in a weird position and I was having back labor. I started to panic. When Toni got there, she was what I needed. She did a double hip squeeze on me through my contractions. That’s when I went into birth mode.

She would do the squeeze and I would hug David and moan low and deep. She stroked my hair and held me tight. She was the mother I needed at that moment. Around 10 pm I was miserable and said I needed to get in the tub. I was definitely in transition. Toni continued to do double hip squeeze but I was so weak that I could barely hold up my upper because I was on my hands and knees. I asked David to get into the tub. He completely supported my upper body.

I reached into my vagina to see if Ben was coming down at all. I could feel his head. I got scared. I knew the pain to come. I told them to put on my christian music. Julie told me to get out of the tub so she could make sure I was really dilated. She said I was. I got a contraction after that that threw me back on the floor and on my knees. I quickly got back in the tub. Had 2 big pushes. It felt like a bowling ball was  coming out of me. My water popped and his head came out. Oh the relief!

Julie said she felt his hand on his head and he was grabbing her finger. She told me to reach down and hold his head and to pant but “Don’t push him out yet!” He was tangled up in his cord and if I pushed him out then it could make me hemorrhage. She quickly untangled him and told me to slowly and easily push him out. He was being held underwater this whole time so I didn’t listen and pushed him out quickly.

I pulled him up. He didn’t scream or breathe but he wasn’t blue or lifeless. He started pinking up quickly. Julie rubbed his chest vigorously. His heart rate was low at first but picked back up quickly. I was in shock that I did not tear, but also very scared that he wasn’t crying. Everyone was assuring me that he was ok. We was just quiet and peaceful.

Once the cord stopped pulsing, David cut it and they delivered the placenta. David took him after that. I got out of the tub and into bed. I finally had my baby. He was so perfect. He was so quiet and just looked at me, completely content to be in my arms! His cord was almost 3 ft long! That’s why he was so tangled. His apgar was 6/9 since he took a little while to get going. He nursed and little and latched right away. Then they took him to the end of the bed to check him.

He was 8 lb 1 oz and 20.5”. My smallest baby. He had a big head though. The midwives and Toni stayed for a couple of hours to monitor my bleeding and Ben. After everyone left, David and I turned the lights off and went to bed with our baby. Birth is hard, painful, scary, and uncertain but God was present the whole time. I was able to sing worship songs to him between contractions and after Ben was in my arms.

I’ve never considered myself strong. I think of myself as vulnerable, emotional, easily hurt, fearful, and weak. But God has created men more different than I can understand. He has brought me through hard physical and emotional challenges to prove that He has created a remarkable woman and mother. Not by my own doing, but His and for His purpose. I pray that I’ll always be His vessel to be used how he desires.

“I love you. I’m with you. I am preparing you for great things.”

I pray that I will be able to help normalize natural out of hospital birth for many women and especially for my girls. It’s a hard journey but the reward is indescribable.