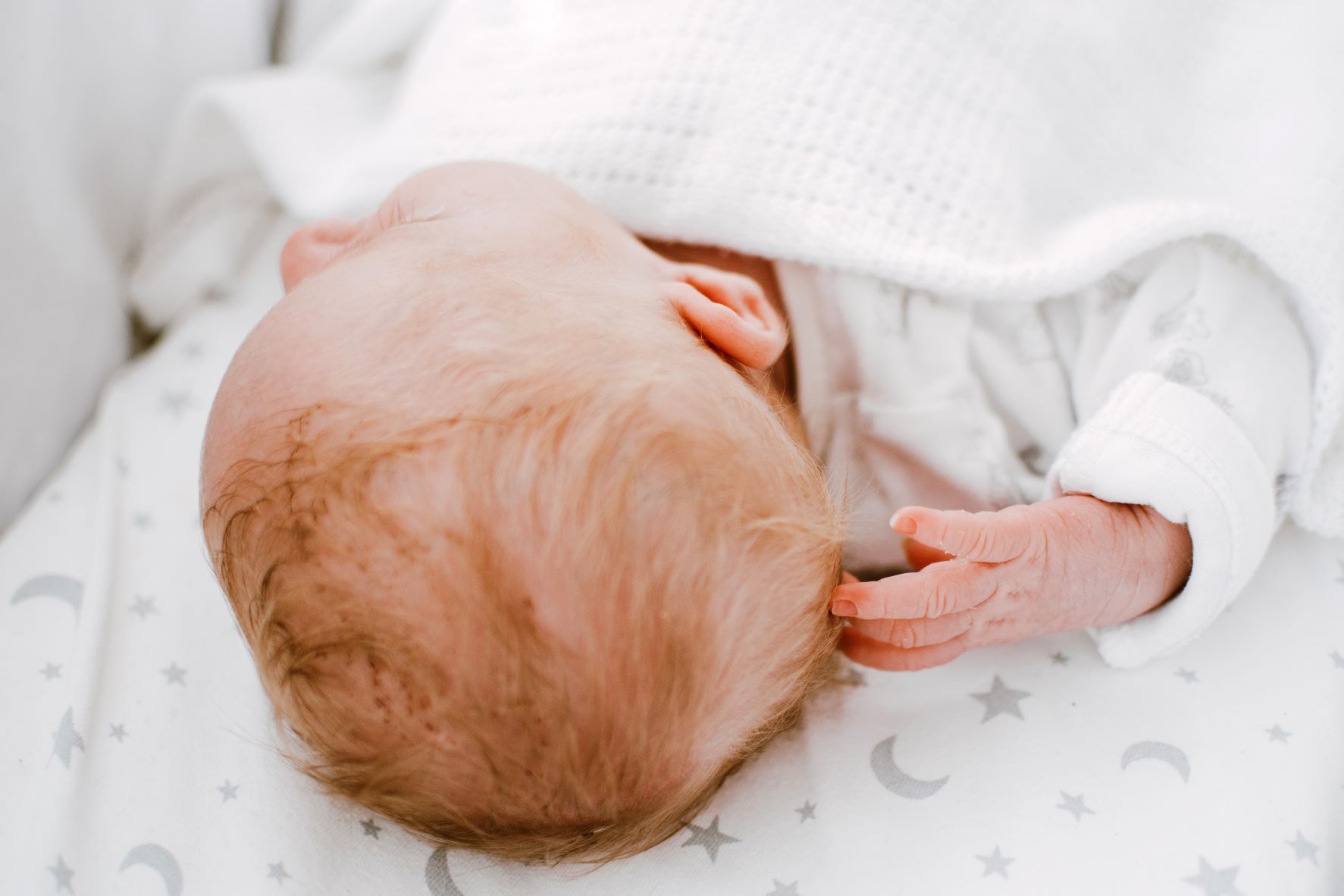 My first instinct when moderate period-like labor cramps began on the morning of my baby’s due date was to shrug them off as statistically unlikely to progress into labor (only 5% of babies are born on their due dates) and move about my day. Sure, they were stronger than the faint cramping I’d been having in the week leading up to this point and sure, they were a lot more consistent… but denial and distraction are undoubtedly coping mechanisms in themselves so I putzed around in a somewhat detached observation of what was happening to me. I baked some cookies (oatmeal – messed up the recipe but they were still edible), mentioned to my husband Joe what was happening (or not happening?), and lay down to get some rest. As a first-time mom, my whole pregnancy had been a practice in relinquishment of control. I intended to treat labor with the same mindset.

Fast-forward to afternoon the following day, and essentially nothing had changed. Cramps, consistently around 5 minutes apart, uncomfortable but tolerable. Speaking to my doula Jen and midwives Robin and Julie, it became clear to me that everyone else had greater concerns about my stagnation of progress than I had been giving mind to. I needed to progress into active labor soon, otherwise we risked my uterus exhausting itself via repeated unproductive contractions. Jen offered to come by the house and “try some balancing techniques” to get labor moving and Joe and I agreed. Joe had been with me every moment, supporting me by himself for the last 32 hours and we were both eager to get some guidance.

It is no hyperbole to state that our doula Jen totally changed the course of my labor for the better.  She was at our house for 7 hours, guiding me through various exercises and positions to encourage baby to shift his position and progress things along. At some point I started to lose my mucus plug. By 9pm, it was clear that labor was, in fact, getting more intense and we would need to head to the birth center soon. I couldn’t talk through contractions, and they were feeling more and more painful. Jen encouraged me to eat, Joe made us peanut butter and jelly sandwiches, and Jen helped us communicate the status of my contractions to Robin who told us to meet her at the birth center at 10:30pm. By this point I was really, really not looking forward to spending any amount of time in the car confined by a seatbelt.

Upon arrival at the birth center, I was just under 4cm dilated and 85% effaced with baby at 0 station (fully engaged in my pelvis). Robin re-warned me of my risk of uterine exhaustion and spoke to me about my options. To this I indicated that I preferred to continue laboring at the birth center for the time being rather than go to the hospital for Pitocin. I was determined to try everything I could to facilitate an out-of-hospital, unmedicated birth. Robin and Julie hooked me up to an IV because I was Group Beta Strep positive and needed to receive antibiotics. I was grateful that the IV did not inhibit my movement for very long and after 30 minutes I was able to disconnect and move freely.

We tried lots of positions and movements as things progressed, and Joe and I took a moment to slow dance (at Jen’s encouragement) to the song “Saturday Sun” by Nick Drake, which would probably prompt me to cry in most normal circumstances but under my current physical and emotional strain tears were inevitable – this was the catalyst for an emotional release that I needed. I was grateful for my ever-supportive husband, for our doula and her undying support, for the birth center providing me the opportunity to give birth in a way that suited and empowered me.

After some amount of time spent laboring under Jen’s guidance (by this point, my sense of time/familiarity with the clock was entirely gone) I had progressed to 6cm dilated and 90% effaced but baby had regressed to -1 station. Robin seemed happy with this progress but warned that we may need to break my water soon to keep the amniotic sac from continuing to pull the baby up out of my pelvis. I was given 30 minutes to try a miles circuit with Jen and my water broke quickly from there (Jen bringing the magic again).

Everything after that point is an absolute blur. I kept telling myself to exist only in the present moment because the thought of doing this for any prolonged amount of time was simply unbearable. I remember asking Joe and Jen if our son would be born “today” – after almost 48 hours I needed some reassurance that I wouldn’t have to do this for another full day. It was probably 2 or 3 in the morning. They both assured me that yes, one way or another we would not do this for another 24 hours. Retrospectively I think they were probably more aware of how close I was to birthing him than I was. I asked to get in the birth tub and it helped soothe my aching body, briefly, between contractions. The trouble was that there was hardly any break between contractions at this point. I was desperate for a reprieve and Jen encouraged me, reminded me of my strength and advised me not to start bargaining. Internally, I was definitely bargaining but I wouldn’t let myself voice a desire to give up. It eventually occurred to me that this must be transition and hopefully I was getting closer to the end. I remember telling Joe and Jen that the simile that birth is like running a marathon is bullshit – in a marathon you know exactly how much distance is left. After 48 hours of laboring, I needed to know there was an end in sight.

Jen suggested that the grunting noises I was making were a sign I might start to push soon. Pushing felt far away and I again lamented internally about the seemingly perpetual nature of my labor. As it turned out, Jen was right (again). It wasn’t long before I felt the strong urge to push. My grunting noises turned into something much more primal and I (despite feeling everything acutely) felt very much outside of my body – it knew what to do in a way my consciousness did not.

Robin checked and saw that baby was at +3 station, almost ready to come out, at which point she started to guide me into more strategic pushing. I’ve heard many times that pushing can feel like a relief compared to transition – personally, I did not find relief in pushing and found the burning sensation to be wildly unpleasant. I pushed his head out and briefly got to see the hilarious expression on my husband’s face – he had previously indicated a desire to stay by my head while I pushed our baby out but lo and behold, there he was with Robin and Julie watching his son arrive earthside! After his head, Robin coached me to push gently (easier said than done – I did a poor job of this amidst all of my urges and ended up with some mild tearing) and his shoulders followed.

With a final push I birthed my son and was overwhelmed by relief and astoundment. Despite 40 weeks of pregnancy and two days of labor, I simply could not believe that a human baby just came out of my body and arrived on my chest. It is one thing to know something in theory and entirely different to know it in practice. Plus – he looked huge! I was in absolute, blissful shock about the whole thing. Robin and Julie immediately hooked me up to receive Pitocin via IV to prevent hemorrhaging, which I was at greater risk of due to the prolonged labor. Joe told me our baby was the cutest newborn he’d ever seen and I emphatically agreed, despite my general understanding of the evolutionary biases that guide parents to believe such things about their offspring. Logic goes out the window when you’re consumed by love.

Our son Bo Bryant McGovern was born at 6:06am, approximately 47 hours after my initial contractions. He weighed 9lb 3oz and was 21in long! In the hours following his birth I felt a supreme sense of accomplishment for myself and my baby, and immense gratitude for Joe, Jen, Robin and Julie. I received the level of support I needed to give life to this child on my terms. Birth definitely ain’t cute but it’s magical in its own right and I wouldn’t change a single thing.